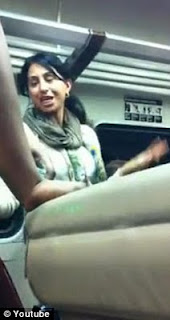 In this video, here's an archived copy, we see an Indian woman, Hermon Raju, get into an angry altercation with a train conductor. Ms. Raju boarded a Metro North train in Westport, Connecticut heading to New York. She was talking very loud on her cellphone and using profanity, passengers complained, so one of the train conductors politely requested she cease her rude behavior. This sends the unstable woman over the edge who then launches into an infantile tirade making a complete fool of herself as she brags about her education! Apparently she thought the conductor would be in awe of her academic credentials and beg her pardon. What an arrogant and deluded woman! She talks to the conductor in such a condescending elitist tone. Hermon Raju was a graduate intern at BNP Paribas recently for a few months, she has an undergraduate degree in politics and a graduate degree in finance and marketing all from NYU. Her condescending and pretentious tirade is truly hilarious. Let this video serve as an example of how one should not behave.

She interned for a Democrat legislator, no surprise there! She has not had a real job, just a few months here and there interning so you'd think since she is now looking for a real full-time job she'd be more careful in public. With such a noxious attitude I don't think she'll be very successful in her career.

"I was not cursing. Excuse me, do you know what schools I've been to and how well-educated I am?" 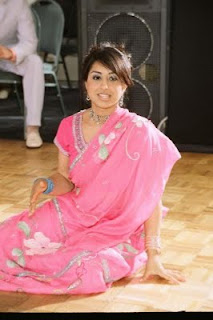 "I am not a crazy person. I'm a very well-educated person."

"I was not cursing, excuse me, do you know what schools I've been to?" 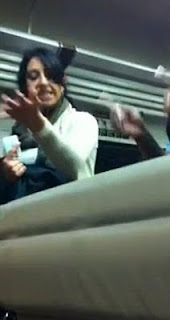 "I'm sorry, do you think I'm a little hoodlum?"

Reportedly after this incident an announcement was made on the train's speaker asking passengers to refrain from using profanity, "especially those people who went to Harvard or Yale or are from Westport." Haha gotta love New York wit. 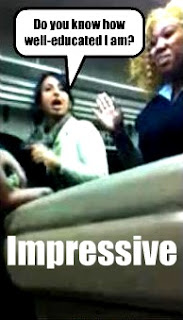 Her full name is Hermon Kaur Raju. After this incident she immediately deleted her twitter (@hermesr211), myspace, facebook and linkedin! LOL. Someone is going into hiding it seems. Here's an archived copy (PDF). 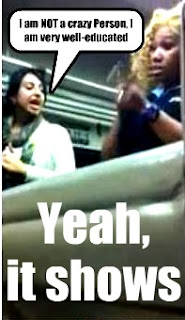 Interesting that she lists, "Excellent management and communication skills", she was certainly a very effective communicator on the commuter train! 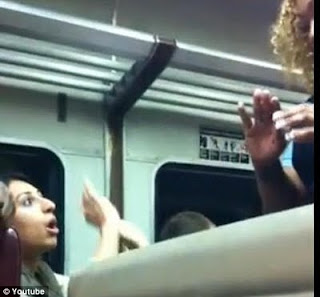 Her hi5 page is down, but here's an archived copy (PDF).

It says, "Im not very nice to strangers." At least she was honest! 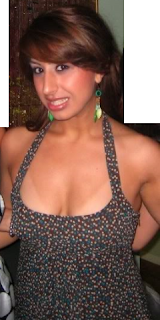 
Note: some images courtesy of Adam.

Posted by Knight Telekinetic at 5:24 PM