Decline of the West; Europe is lost 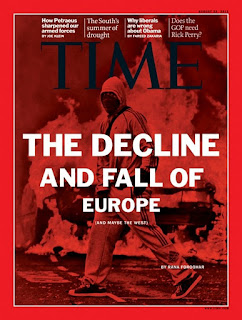 In Japan you still have a fairly intact family unit, schools are much stricter than in the West, children are taught to follow the law and be good citizens. Hedonistic parents in the West raise their spoiled brats to be narcissistic self-absorbed twats who just look to satiate their base carnal desires; if anyone gets in their way they just step over them. The feminist movement and so-called sexual revolution has destroyed the family unit. In the black community 90% of kids are born bastards and grow up with no father present. Things aren't much better in the white or hispanic communities. I regularly read in the British broadsheets of the rise of hooliganism and thuggery, school kids slashing each other with knives, and the law is lax and lets them off the hook. Sexual morality is at an abysmal level in the West too. Half the population is either stoned on drugs or in a drunken stupor. Also a fundamental, a very non-PC, factor is people turning away from God. For those bashing America: yes we have our faults, as does any country, but at least we still have a majority Christian nation and haven't bowed down to the tyranny of the Islamists and welcomed the Trojan Horse into our own shores as misguided liberal Britain and much of Europe has done. It's too late for you now, but we still have a chance. The European Union has failed and many member nations now have stagnant economies deep in debt, with high unemployment, crushing social obligations (especially as tens of millions of illiterate immigrants, mainly Muslims, received social benefits), failing central banks, currency decline, inflation and over-taxation. Enjoy the Sharia law which will be coming in the next decades!
decline economics Europe immigration islam morality West