The 5 Points of Calvinism Poem 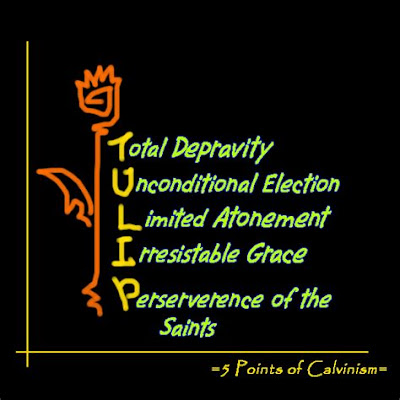 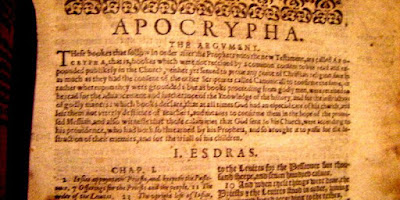 The Apocrypha (απόκρυφα means “hidden”) is a set of books written between approximately 400 B.C. and the time of Christ. These books are Tobit, Judith, 1 and 2 Maccabees, Wisdom of Solomon, Sirach (also known as Ecclesiasticus), and Baruch.  The Roman Catholic, Orthodox, and Protestant churches all have Bibles with varying lengths. These different canons include 39 books of the Old Testament for the Protestant canon, 46 books of the Old Testament for the Roman Catholic canon, and up to 54 books of the Old Testament for the Orthodox canon. Thee 7 additional Old Testament books in the Roman Catholic  canon is known as the deuterocanonicals or Apocrypha. We Protestants reject the Apocrypha. The Apocrypha teaches several erroneous doctrines: The pre-existence of the soul. The belief that the kind of body one now has is determined by the character of his soul in a previous life: “Now I was a goodly child, and a good soul fell to my lot; Nay rather, being good, I came into a body undefiled
Post a Comment
Read more

What is the Rock? 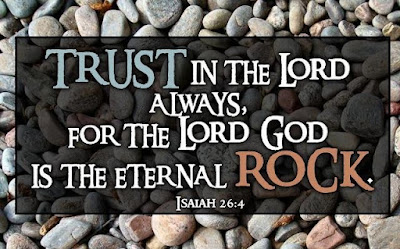 Here is a quick summary of the way that the Church Fathers interpreted that verse "Thou are Peter and upon this rock...." (Matthew 16:18) Archbishop Kenrick, who was one of America's extraordinary bishops, was opposed to the doctrine of papal infallibilty and at the First Vatican Council in 1869 he voted against it. He wanted to deliver a speech against the proposed doctrine at the Council but instead he ceased to attend the Council meetings. He published his speech in Naples the following year. It is important because he lists the five different patristic interpretations of Matthew 16:18. Let's look at how the Church Fathers line up over this verse: "That St. Peter is the Rock" is taught by seventeen (17) Fathers. That the whole Apostolic College is the Rock, represented by Peter as its chief, is taught by eight (8 ) Church Fathers. That St. Peter's faith is the Rock, is taught by forty-four (44) Church Fathers. That Christ is the Rock, is taught by six
Post a Comment
Read more

Doctrines of Grace in the Early Church Fathers 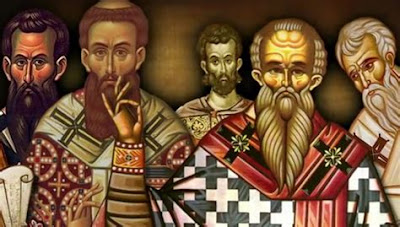 Contrary to what Roman Catholics and Orthodox apologists assert, the doctrines of grace (the 5 points of Calvinism -- TULIP) did not originate in the 16th century! They were believed by the Early Church.  They may not have used the exact terminology which later writers would employ, but it's clear from the quotes below that they absolutely believed in them. The following quotes are taken from the Appendix of Michael Horton’s Book, “Putting Amazing Back into Grace.” They have no citations. TOTAL DEPRAVITY Barnabas (A.D. 70): “Learn: before we believed in God, the habitation of our heart was corrupt and weak.” Ignatius (A.D. 110): “They that are carnal cannot do the things that are spiritual…Nor can the unbelievers do the things of belief.” Justin Martyr (A.D. 150): “Mankind by Adam fell under death, and the deception of the serpent; we are born sinners…No good thing dwells in us…For neither by nature, nor by human understanding is it possible for me to acquire the knowledge of thing
Post a Comment
Read more

One Nation Under God 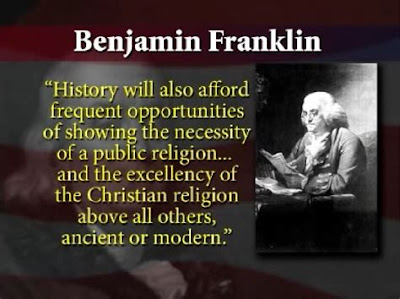 A Few Declarations of Founding Fathers and Early Statesmen on Jesus, Christianity, and the Bible (This list is by no means exhaustive; many other Founders could be included, and even with those who appear below, additional quotes could have been used.) John Adams SIGNER OF THE DECLARATION OF INDEPENDENCE; JUDGE; DIPLOMAT; ONE OF TWO SIGNERS OF THE BILL OF RIGHTS; SECOND PRESIDENT OF THE UNITED STATES The general principles on which the fathers achieved independence were the general principles of Christianity. I will avow that I then believed, and now believe, that those general principles of Christianity are as eternal and immutable as the existence and attributes of God. 1 Without religion, this world would be something not fit to be mentioned in polite company: I mean hell. 2 The Christian religion is, above all the religions that ever prevailed or existed in ancient or modern times, the religion of wisdom, virtue, equity and humanity. 3 Suppose a nation in some distan
Post a Comment
Read more
More posts