PETA has discovered that recently on a trip to Zimbabwe GoDaddy.com CEO Bob Parsons killed an elephant. This was done for pure sport! What an arrogant and despicable man. Elephants are a threatened species. His excuse that this was done to protect the villagers is absurd. Hey Bob instead of stroking your pathetic ego and murdering a majestic, intelligent, gorgeous African bull elephant in cold blood with your high powered rifle you could have taken some of your vast personal fortune, estimated at $200 million USD by celebritynetworth.com, and built a fence around the village or found another solution to the alleged problem the elephants were causing. Not to mention the fact that this is the elephants natural habitat - their home. The truth is that Bob Parsons wanted to satisfy his blood lust by killing a defenseless creature that was unable to fight back against his lethal weapon. He is a very insecure man with an utterly cold heart. You are in spiritual darkness Bob Parsons! Repent of your great evil, turn to Christ and renounce your Satanic ways. Instead of using his wealth to do good he is hunting down innocent elephants!

This sicko Parsons has even posted a boastful video on Video.me (GoDaddy.com's own video sharing site) entitled, "Hunting Problem Elephant - My 2011 Vacation" and this was posted in the "Adventure" video category! Murdering an innocent animal is your idea of adventure Bob? He posted this description of the video:

"Each year I go to Zimbabwe and hunt problem elephant. It's one of the most beneficial and rewarding things I do. This video shows a typical day of this year's trip. I just returned home today March 14, 2011."

Wow so he feels compelled to do this every year?! Parsons is a very disturbed man. According to the video this is the second consecutive year he's done this.

Here is the video, but be warned this is very brutal and graphic:

Some stills from the disgusting video: 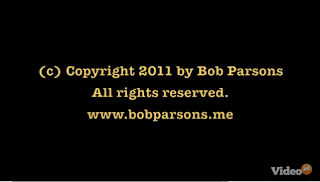 Note that in the photo of Parsons standing over the dead elephant he actually has a smile on his face! How sadistic. If you look closely you can see a stream of tears coming from the right eye of the elephant. :( If Parsons prime motive was helping these poor villagers he could have done so without murdering this elephant. Instead of making water wells, providing permanent shelter, donating seed for crops, making a seed barn, giving the kids OLPC computers, giving out loans to help the people start their own businesses, building and staffing a hospital or any other of numerous ways of helping he chose to instead kill a defenseless animal! So his flimsy justification for this barbaric act is pure rubbish.

"A righteous man cares for the needs of his animal, but the kindest acts of the wicked are cruel."
- Proverbs 12:10

"For that which befalleth the sons of men befalleth beasts; even one thing befalleth them: as the one dieth, so dieth the other; yea, they have all one breath; so that a man hath no preeminence above a beast: for all [is] vanity." - Ecclesiastes 3:19

Elephants have an extremely close family unit. Numerous elephants will deeply mourn the murder of this beloved family member. Elephants would never abuse their children as human parents have done so many times. An elephant mother would not hesitate to sacrifice her own life to save her children. I recall watching a news report about a case in India where a baby elephant was killed by a train. So profound was her loss that the next day at the same exact time when the train was due to pass by the mother of the slain child rushed forward and derailed the train, she sacrificed her own life to get justice for her dear baby!

If you want to support a great organization and find the most up to date research on elephants and their conservation go visit the Save The Elephants site here: http://www.savetheelephants.org/ 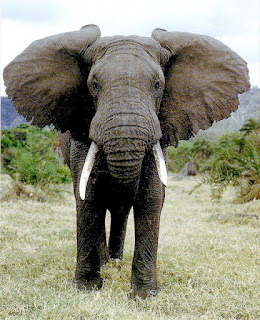 Posted by Knight Telekinetic at 10:38 PM