August 03, 2012
Thanks to a recent story in The Independent online my blog got a bunch of pageviews. Woot! Check out the stats: 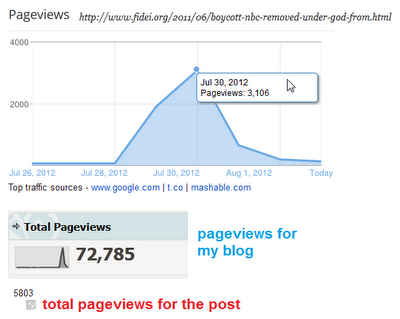 By the way, I agree with journalist Guy Adams. NBC's coverage of the Olympics has been amateurish, inept and downright irritating. He didn't deserve to have his Twitter account suspended. Instead of broadcasting events live, which would occur in the afternoon here, they make us wait until 8pm EST to watch tape delayed broadcasts. This is after the results have already been known for hours and disseminated all over various media outlets! Further NBC is making dumb mistakes. Last night they announced the winner of the women's 100m freestyle race before the race was aired thanks to a promo spot for the Today Show. This is embarrassing. And one would get the impression from watching NBC's coverage that the only events which exist are track and field, gymnastics and swimming; and the only countries competing are China, Britain and America!
NBC Olympics Twitter