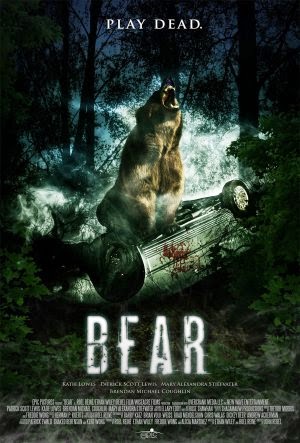 I'm surprised it is averaging a rating of 4 stars on IMDB! For an ostensible thriller there was little genuine suspense or even horror. The acting was plodding and lacked any real depth or nuance. Character development was kept a bare minimum. A pair of brothers and their significant others are in a car on a trip to some steak house to celebrate someone's birthday (I had to fast forward a bit due to the extreme boredom), they go off the main roads for a short-cut, get a flat tire, the arrogant older brother shoots a young bear like 12 times with what appears to be a 9mm handgun, the mother (or father?) bear is very upset and seeks revenge. That's as far as the plot was developed. Nothing much here. At one point as they've crawled to the end of this metal pipe if you look at the left hand corner you can actually see production people shooting the film! This movie tried to do for bears what "Cujo" did for dogs and fell very flat.
Posted by Knight Telekinetic at 4:28 PM